Remember, Remember the 20th of November: Transgender Day of Remembrance 2015

It was a evening we had been working towards for months and it turned into a night we will remember for years.

The 20th of November is Transgender Day of Remembrance, a day commemorating the transgender people who have lost their lives to transphobia and hate crime around the world.

Nell Stockton of LGBT Sheffield led the event which featured a hard hitting poem by Sarah Thomasin, moving speeched by Tracey Howard and Debs Aliya Lindley, especially composed music by Madge Wollard and Jo Whateley, a minute of noise and a candlelit vigil.

Earlier that day The University of Sheffield Student Union’s LGBT society had organised events on the topics of transgender lives, including an I’ll Go With You workshop by Zac Snape, and many of those attending the ceremony that evening were students, a generation of young voices mourning those lost too soon.

But it wasn’t just young people who had come along; people of all walks of life gathered to light a candle, listen and reflect on the very real, harsh realities faced by those who are transgender.

After the ceremony, which left no one untouched, many of us headed down to the Odeon cinema for the premiere screening of Trashing Transphobia, the documentary that one of our film groups had been working on this autumn. 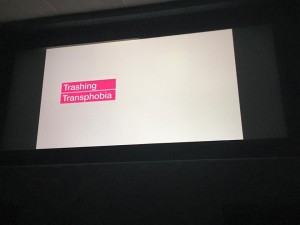 The film, which had taken 15 learners, two mentors, 13 weeks and endless hours of learning, filming and editing to produce, sees Laura Holt go on a journey to discover what the transgender community goes through and why.

Meeting with different trans men, trans women, support workers, activists, researchers, allies and families she uncovers some of the transphobia prevalent in society today and she comes to the conclusion that we need to open our hearts and listen to those who are transgender. “That is how we trash transphobia,” she says. 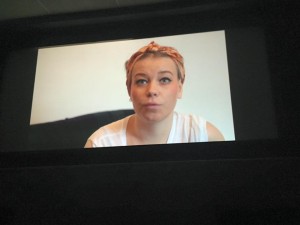 Making the documentary was at times a tough, time consuming and often very emotional job but it was also fun, eye-opening and immensely rewarding and still it only felt like we scratched the surface of the topic. There were many more stories that needed telling than the film would allow for but the end result is one to be proud of. And the demand to see it was big.

When we released the tickets for the premiere screening at the Odeon in Sheffield we didn’t know what the interest might be like but we were overwhelmed to find that all tickets were reserved with weeks left until the screening. On the night we had a long queue of people hoping for spare seats and we ended up with a packed out cinema. Not a seat was free and not an eye was dry once the film had finished playing.

Once the applause had faded many of us headed up to the Viper Rooms, a city centre bar that we had hired out for the evening together with LGBT Sheffield and The University of Sheffield. The Viper Rooms had kindly created Mermaid cocktails especially for us, a lovely touch considering we had been fundraising for Mermaids, a charity helping transgender children and their families, whose Chairperson we interviewed in Trashing Transphobia.

DJ Lola, Fruits and Heather spun tracks and Nell announced the different activities that we had organised together with her and the Sheffield University LGBT society’s Gemma. We had people writing down examples of transphobia and trashing it in a trash can, we had people making wishes for a better future with local drag queen Tia-Anna pinning them to a board of wishes and all in all we had a club full of people enjoying themselves whilst feeling safe.

The atmosphere was truly inclusive and it was great to see everyone relaxing after what had been a long project and a tough day. It was a party and we wanted to celebrate the film premiere but for us it was also important that we continued to remember the purpose of the event and that we look to the future to ensure we make it a positive one for transgender people around the world.

As we went to leave for the final party of the night, this one at the newly opened OMG nightclub, one of the transgender participants told me they hadn’t been out in town for years, for fears of feeling unsafe. Tonight was a milestone in their life; a time when they could be out and about on a Friday night, enjoying themselves. It was great to hear but at the same it was heartbreaking. This is the way it should always be; anyone and everyone should feel safe to go outside, meet people and enjoy themselves. Whenever, wherever and whoever they are.

We are lucky to live in Sheffield where acceptance of transgender people is growing. We are lucky to have passionate people like Nell Stockton, Gemma Halliwell, Claire Watkinson and the fantastic group of people who made the Trashing Transphobia film. Not to mention all the business owners who let us film on their premises and who welcomed us host our events at theirs – or the volunteers helping make our films happen, or the 110+ people who wanted to come and see the premiere of Trashing Transphobia. It is good to see that among all the darkness of rising hate crime statistic and death rates there are flickers of light and of positivity.

The Sheffield Trans* Map is a great initiative and a wonderful example of this. It asks businesses and establishments to guarantee a safe experience for anyone visiting their premises, regardless of gender and so far it has been a great success with many signing up. (You can view it here.) We can only hope that the map will expand and that more pubs, bars, shops, restaurants, cafes and service providers will sign up. Because if there is one thing that stands out from this event then it is that genuine collaboration, reaching out hands to help and not to grab, talking with one-another and being vocal about our support to those that most need it; those are the thing that create progress and positive change.

Transgender Day of Remembrance was in many ways a sad and dark day but it was also a turning point and a wake-up call for many; Together we can Trash Transphobia. And that we must always remember.