We are recruiting for the E.D.E.N Shorts project, please read below more details about the role advertised and how to apply. Good luck! 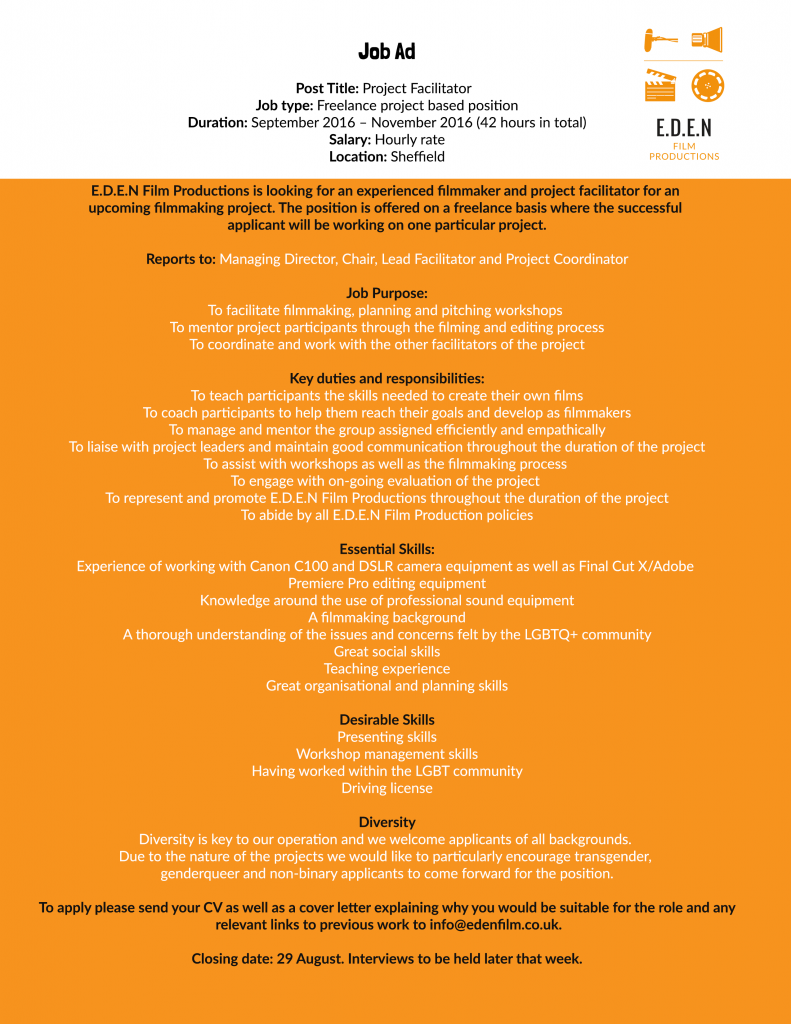 You can now watch the two films produced in the Something About Us project online!

Something About Us was a project funded by The Heritage Lottery Fund (HLF) and based in Worksop. Working with young people from the lesbian, gay, bisexual and transgender group W.O.W in Worksop, the project aimed to research and record what it was like historically to be LBGT in the past compared to the present-day, with a focus on the local area.

The project provided training in archive research skills, oral history techniques and filmmaking skills, providing an opportunity for these LGBT young people to have a voice and to share the history they have found with their wider community to aid a more beneficial understanding of the LGBT community locally. The young people produced a documentary film ‘Something About Us’ using their oral history interviews and findings from research from Nottinghamshire and Sheffield Archives. Throughout the project the young people have been recording their own on-going reflections of the process on and have produced a separate reflective film ‘W.O.Wing me, W.O.Wing you’.

This project has given the LGBT W.O.W members a voice in their own town and community while helping them as individuals on their own personal journeys as they learn about the experiences of other LGBT people in the past.

E.D.E.N Film Productions is planning a new filmmaking project for the Lesbian, Gay, Bisexual and Transgender community and you can register your interest in taking part now. With a planned start for the end of the summer 2016, the project would provide camera, sound and film editing training in workshops held free of charge in Sheffield. Participants would learn and develop filmmaking skills whilst working on films that, once finished, that would be entered into the new Sheffield-based transgender film festival Transforming Cinema.

Transforming Cinema is an E.D.E.N project that aims to create a trans focused film festival giving transgender and gender nonconforming people a platform to broadcast their voices and stories. We want you to be part of it but we need to know that the interest is there in order to plan it – so register your interest today! 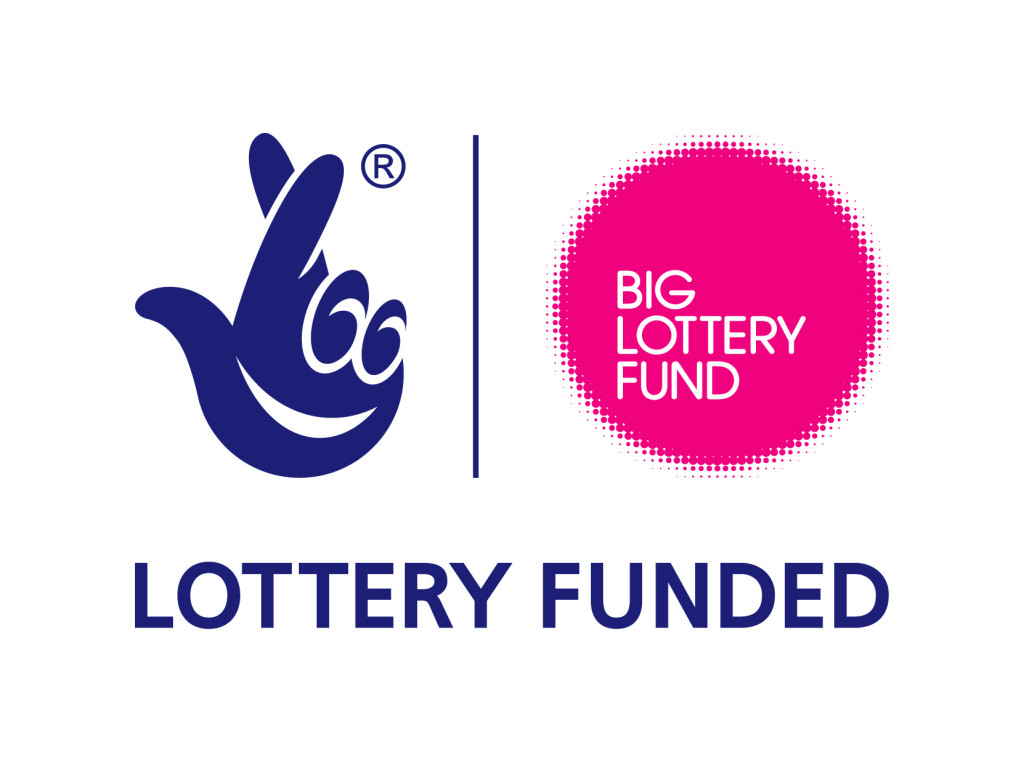 We are very pleased to announce that transgender film festival Transforming Cinema has been given the green light.

Earlier this year we campaigned to get funding for transgender film festival Transforming Cinema but despite great support from across the country we were unfortunately unsuccessful in getting securing the grand prize at the time. However, we are extremely pleased to announce that we have now secured funding from The Big Lottery Fund that enables us to go ahead with the project anyway, albeit on a smaller scale.

What is Transforming Cinema?

Born out of our previous projects E.D.E.N Action! and Trashing Transphobia, Transforming Cinema aims to create a trans focused film festival giving transgender and gender nonconforming people a platform to broadcast their voices and stories.

Why is this important?

In the past few years we have seen press cover the stories of transgender and gender nonconforming people more regularly but there is still a lack of understanding in society at large. Mainstream films rarely touch upon this subject and trans people are suffering because of the widespread ignorance and negativity that often surrounds their depiction in the media.

Depression, self-harm and suicide are some of the issues that affect trans people to a much higher rate than non-trans people; media representation is low and the messages we do hear are negative, unhelpful and even harmful.

Transforming Cinema will challenge this as we launch a national film festival that champions trans people, films and stories.

We are going to provide basic filmmaking training as well as a pitching session for members of the lesbian, gay, bisexual and transgender (LGBT) community to put forward ideas. From here we are going to mentor three groups that will produce films that will be submitted to the film festival.

How do I get involved?

Keep an eye on Transforming Cinema on Facebook and on E.D.E.N’s website to find out more about how to get involved in the film training, pitching, making and submitting films to the festival. There will also be opportunities for volunteers to gain excellent experience, working at the film festival.

Transforming Cinema will go ahead on Transgender Day of Remembrance on the 20th of November 2016.

Focus on… Social Impact was the event run by Sheffield Social Enterprise Network. The event was part funded by The Big Lottery Fund.

We filmed the Gender Respect Pupil Conference, an event run by DECSY’s as part of their Gender Respect Education Project, where young people from the project schools were brought together for a day of awareness raising and developing actions and sharing them.

DECSY’s are bringing together teachers of pupils aged 4-14 along with creative practitioners and young people to develop engaging, participatory and creative curriculum activities and materials which meet the following learning outcomes:

Children and young people will:
• Question gender stereotyping (including engaging boys as well as girls)
• Understand global and historical contexts of gender relations
• Explore issues of power, freedom and human rights in the context of gender
• Feel empowered to take action (especially through the use of social media)

These curriculum materials will be disseminated widely through CPD / INSET
and websites.

Project partners include Chilypep, Sheffield One Billion Rising and VIDA.

Trashing Transphobia, funded by The Big Lottery Fund, run from August 2015 till November 2015 and worked with 15 members of the LGBT community. The project involved training the 15 members of the LGBT community with filmmaking and interviewing skills, which they have used to produce a feature-length documentary, Trashing Transphobia. The participants have been involved with the planning, production and post-production of the film.

Sad news: unfortunately, we didn’t make the top three in The People’s Project. Although disappointed not to have been awarded the funding we are still determined to make Transforming Cinema happen, albeit on a smaller scale than initially planned.

Thank you all for your votes and shares, your kind words and encouragement; it’s been two fantastic weeks of campaigning and spreading awareness and we have made lots of new friends and connections. For that we are eternally thankful and we look forward to continuing these conversations.

Transforming Cinema will still go ahead; we are going to take some time to plan how we can move things forward and will reveal more details soon. In the meantime do give the new Transforming Cinema Facebook profile a like to keep up to date.

Huge congratulations to Me, Myself & I, Evolve – Penistone FM Community Radio – Opportunities for all and The Bakehouse Project three very worthy winners. We look forward to seeing their projects develop.

From the bottom of our hearts, thank you. It’s been amazing to have come this far and we are excited for the next chapter.

With a week to go until voting closes for the ‪#‎PeoplesProjects‬, here’s why we think you should vote Transforming Cinema. (Feel free to share if you agree!)

You can vote at: https://www.thepeoplesprojects.org.uk/projects/view/transforming-cinema