On Friday the 4th December 2020 at 7pm, E.D.E.N. Film Productions showcased the short films that were produced by members of the LGBTQ+ community on their online filmmaking project, E.D.E.N. Digital.

E.D.E.N. premiered the films made on the project alongside behind the scenes footage and interviews with participants. The event started at 7pm via E.D.E.N.’s Facebook and YouTube, using the premiere functions.

E.D.E.N. Digital was funded by the Government’s Coronavirus Community Support Fund and distributed by The National Lottery Community Fund.

On the 8th October, as part of the E.D.E.N. Digital project, Joy Gharoro-Akpojotor delivered a masterclass about how to make a short film. 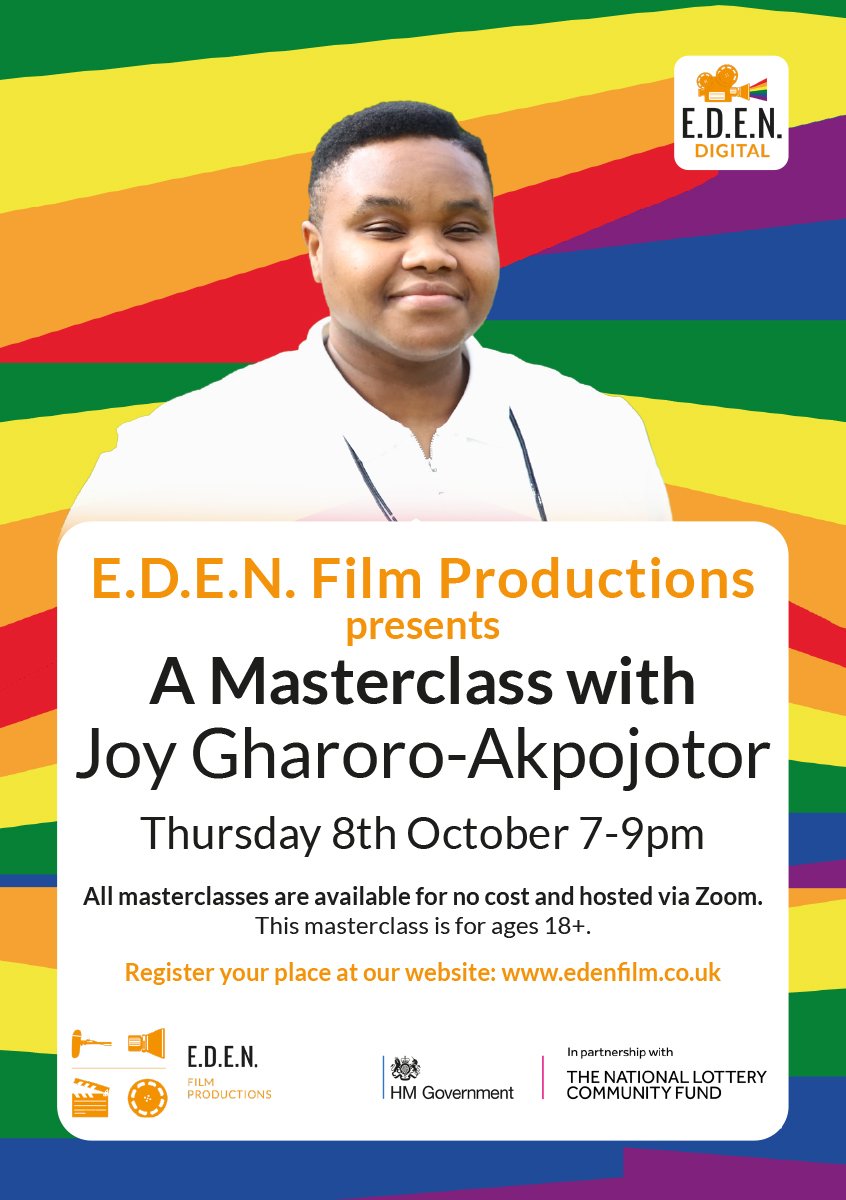 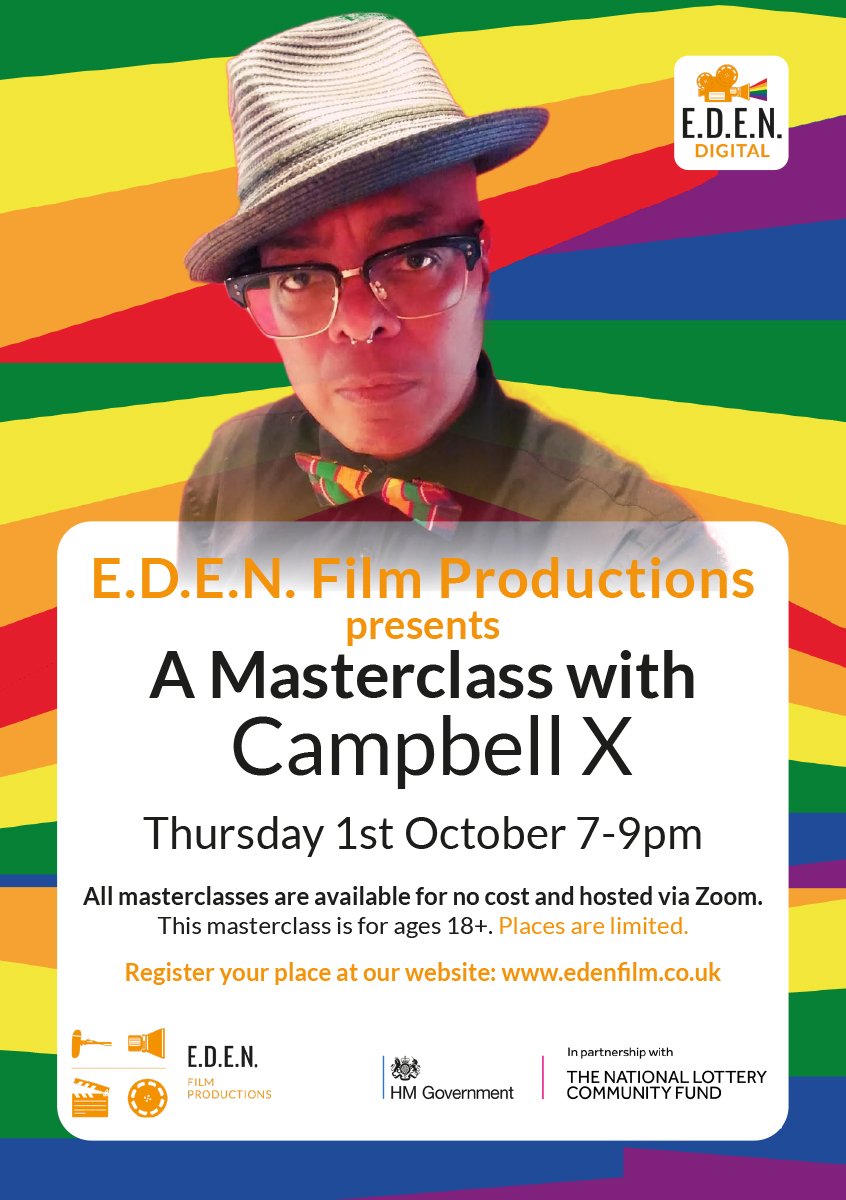 On the 1st October, as part of the E.D.E.N. Digital project, Campbell X delivered a masterclass about getting your film from idea to screen.

Masterclass description: Campbell X gives a workshop on getting your film from idea to screen. Bring your one page treatments. Campbell will guide you in how to:

The workshop will include exercises and will be interactive so bring enthusiasm, pens, crayons, paper, tablets, laptops, smartphones.

How to Have a Queer Career with Rikki Beadle-Blair

On the 21st September, as part of the E.D.E.N. Digital project, Rikki Beadle-Blair delivered a masterclass about how to have a queer career.

Masterclass description: Break through the glass ceiling in your brain and learn to make the most of everything about you in this inspiring, practical workshop for anyone who wants to represent the LGBTQI+ community and have fun doing it. 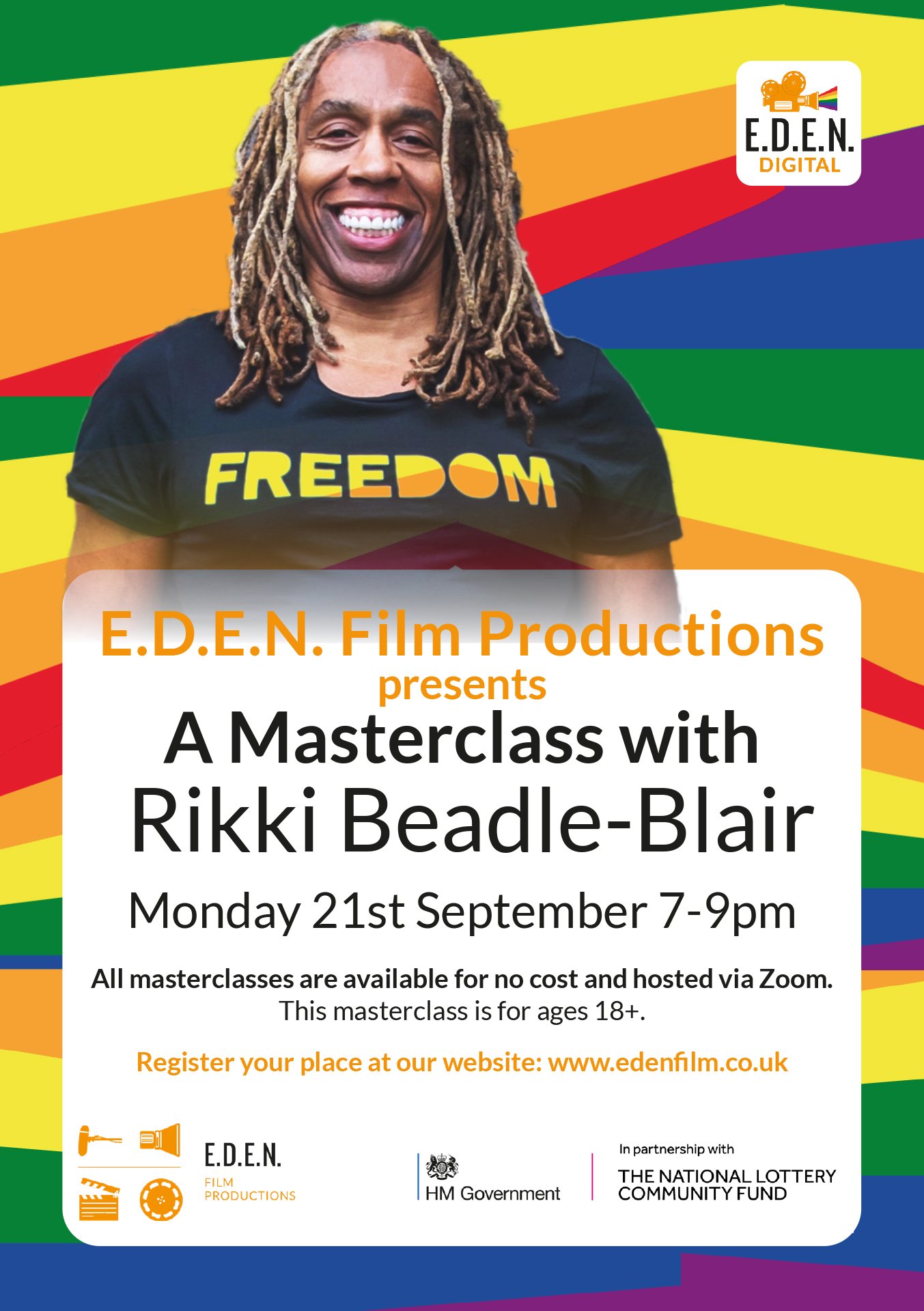 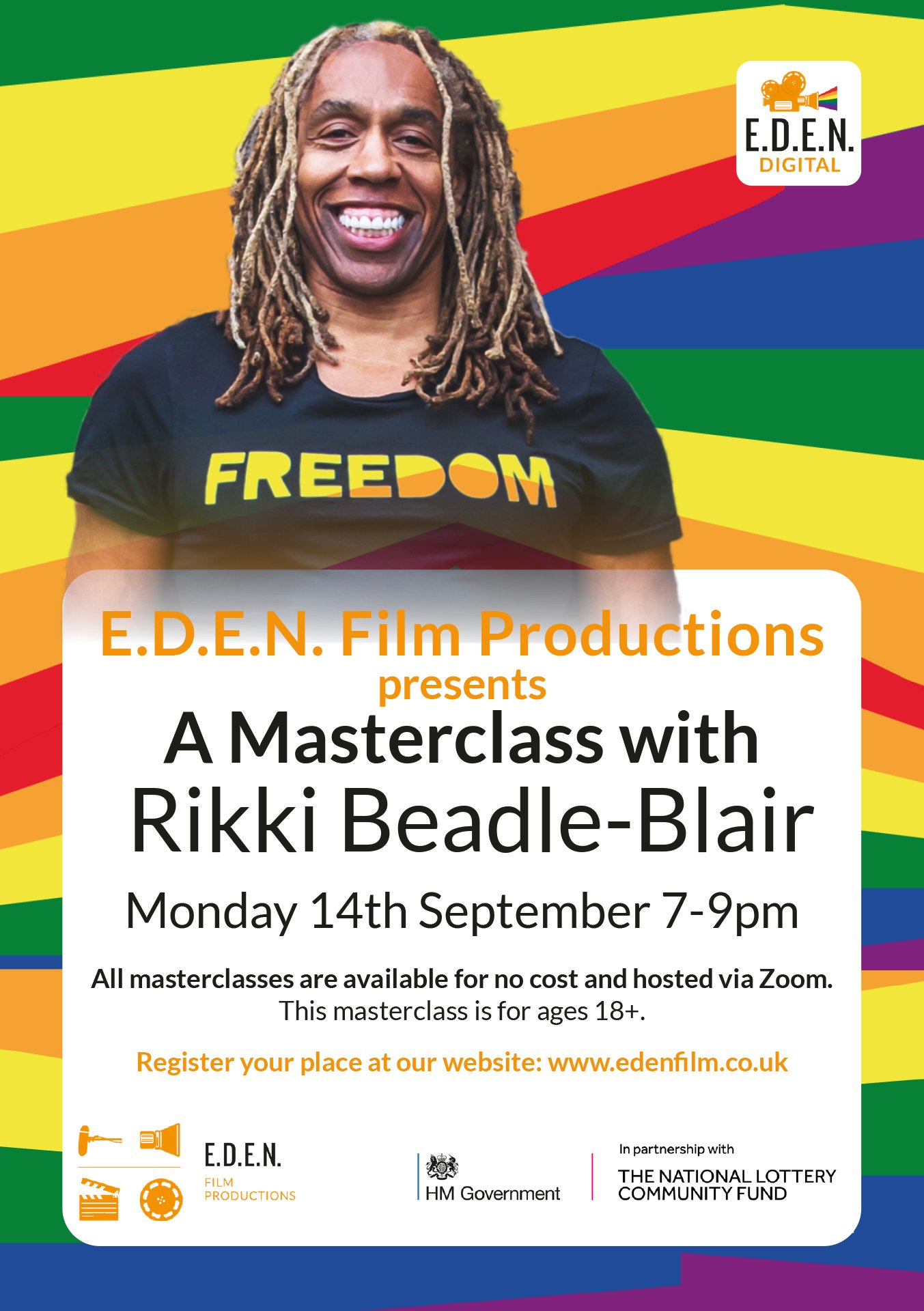 How To Write Great Screenplay with Rikki Beadle-Blair

On the 14th September, as part of the E.D.E.N. Digital project, Rikki Beadle-Blair delivered a masterclass about writing a screenplay.

Masterclass description: Break down and demystify the thrilling processes of creating and completing an exciting, relevant film script. Fall in love with the work. Get your vision out there!

Brett Chapman – How to make a living as an independent filmmaker

On the 10th September, as part of the E.D.E.N. Digital project, Brett Chapman delivered a masterclass about how to make a living as an independent filmmaker working outside of the traditional structures of the film industry. The masterclass looked at ways that filmmakers can diversify their income streams whilst continuing to make award-winning work that they care about. From a short film made on a point and shoot camera to a 50k short film, Brett talked about some of his previous projects and shared his insights and tips for surviving as an indie filmmaker. 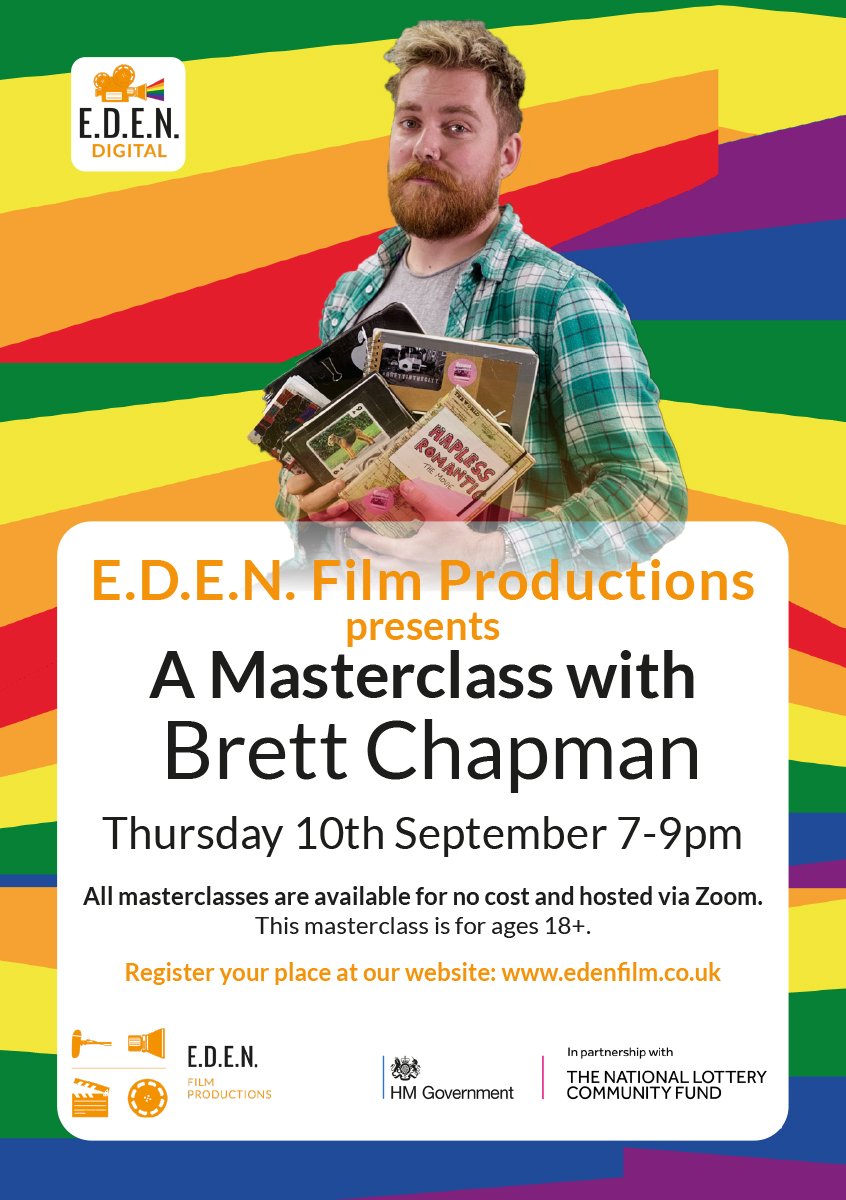 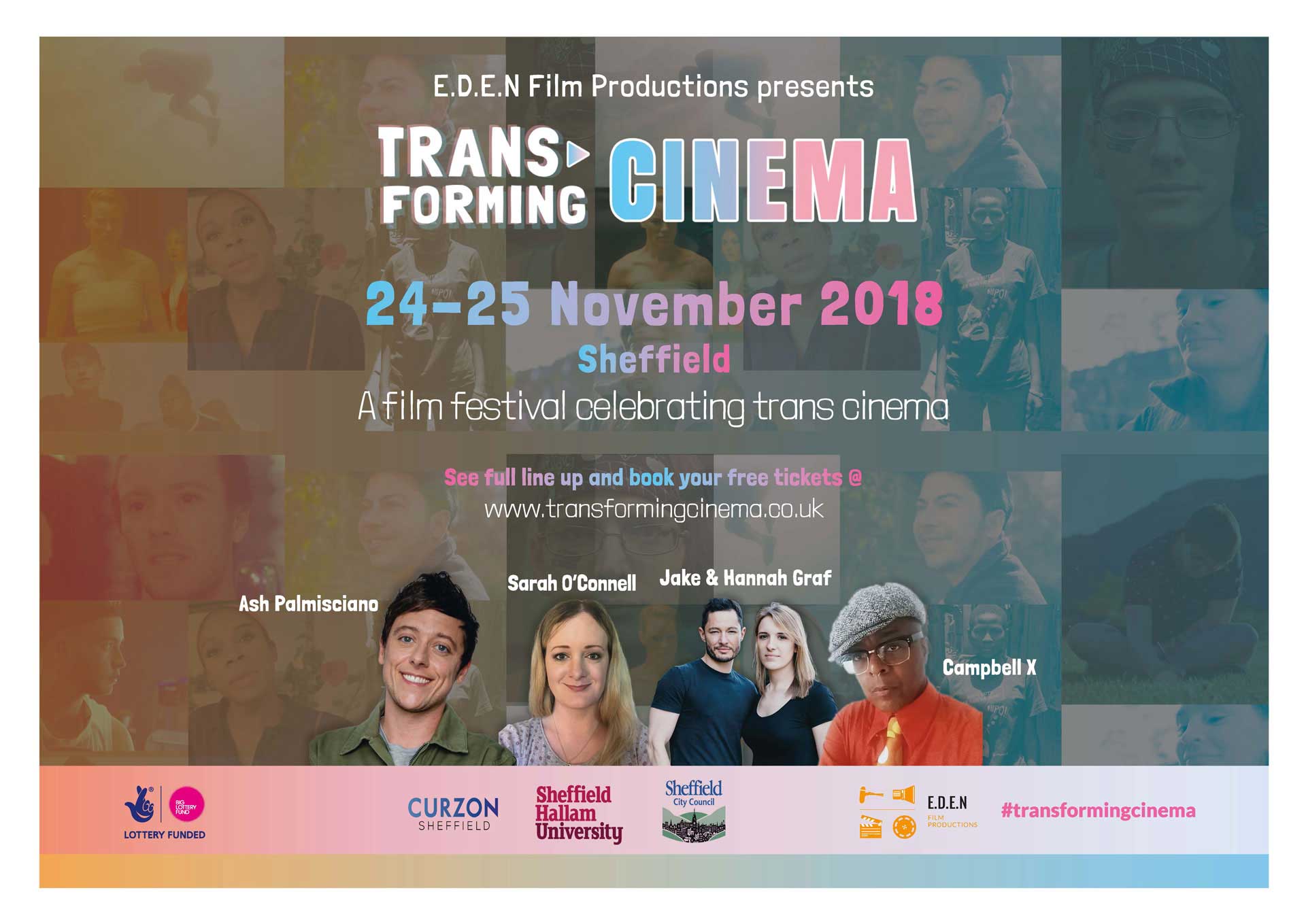 Over the weekend of 24th and 25th November 2018, filmmakers, speakers and artists from across Europe and the UK came to Sheffield to celebrate Transforming Cinema – Sheffield’s first film festival to focus on transgender and non-binary films and storytelling.

With overs 30 films, shorts, documentaries, workshops and Q&As, the weekend was a great success, with so many important conversations taking place and powerful stories being shared. Click here to find out more.

On the 19-20 November 2016, filmmakers, speakers and artists from across Europe and the UK came to Sheffield to celebrate Transforming Cinema, Sheffield’s first film festival focused on transgender and non-binary films and storytelling. It was such a rewarding feeling seeing the months of planning unfold over the weekend. Click here to find out more. 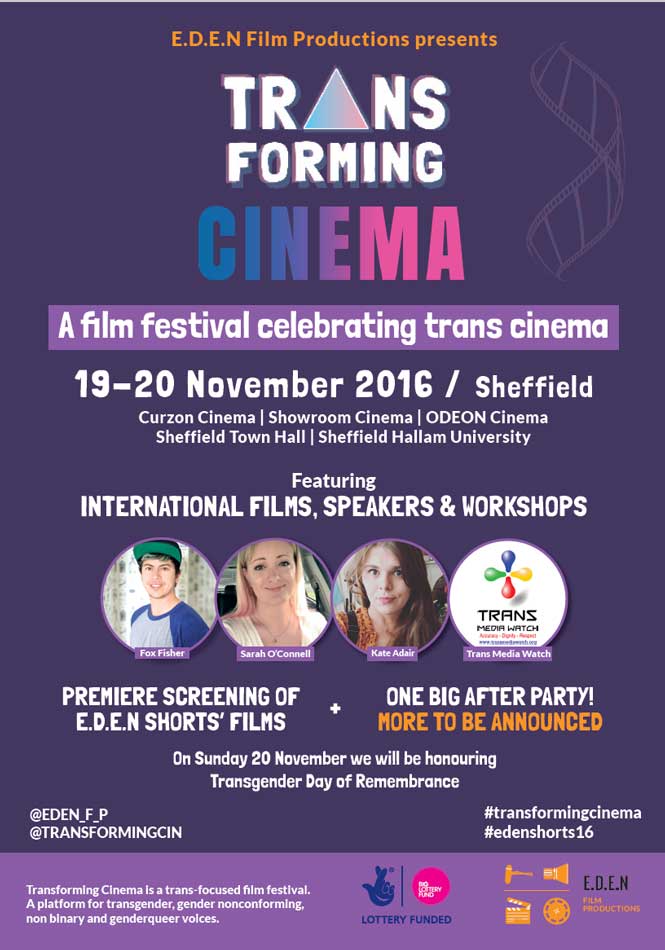 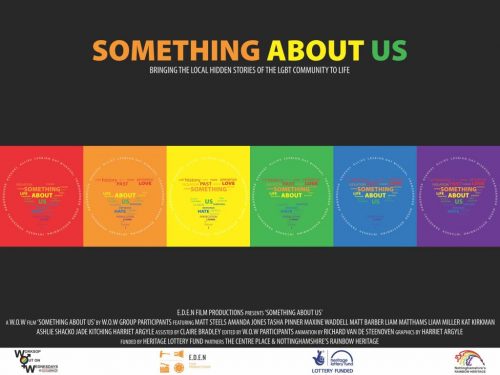 Two films made by the Worksop Out on Wednesday (WOW) lesbian, gay, bisexual and trans support service at The Centre Place and E.D.E.N. Film Productions as part of the Heritage Lottery Funded history project ‘Something About Us’ were screened at the Savoy Cinema, Worksop on the 3rd of February 2016. Over 60 people attended the screening to watch the end result of the research and recordings which compare how life was to be LGBT to the present-day, with a focus on the local area. David Edgley (Nottinghamshire Rainbow Heritage) provided a presentation focusing on general LGBTQ+ history as an introduction to the films.

‘Something About Us’ was a project run by E.D.E.N. Film Productions, which began in June 2015, that involved the young people attending the W.O.W service researching and recording what it was like historically to be LGBTQ+. The project provided training in archive research, oral history and filmmaking techniques. The young people produced a documentary film ‘Something About Us’ using their oral history interviews and findings from research from Nottinghamshire and Sheffield Archives. Throughout the project the young people recorded their own on-going reflections of the process and produced a separate reflective film ‘W.O.Wing me, W.O.Wing you’.

The films were also shown at other locations over LGBT History Month, which included:

Trashing Transphobia, funded by The Big Lottery Fund, run from August 2015 till November 2015 and worked with 15 members of the LGBTQ+ community. The project involved training the 15 members of the LGBTQ+ community with filmmaking and interviewing skills, which they have used to produce a feature-length documentary, Trashing Transphobia. The participants have been involved with the planning, production and post-production of the film. 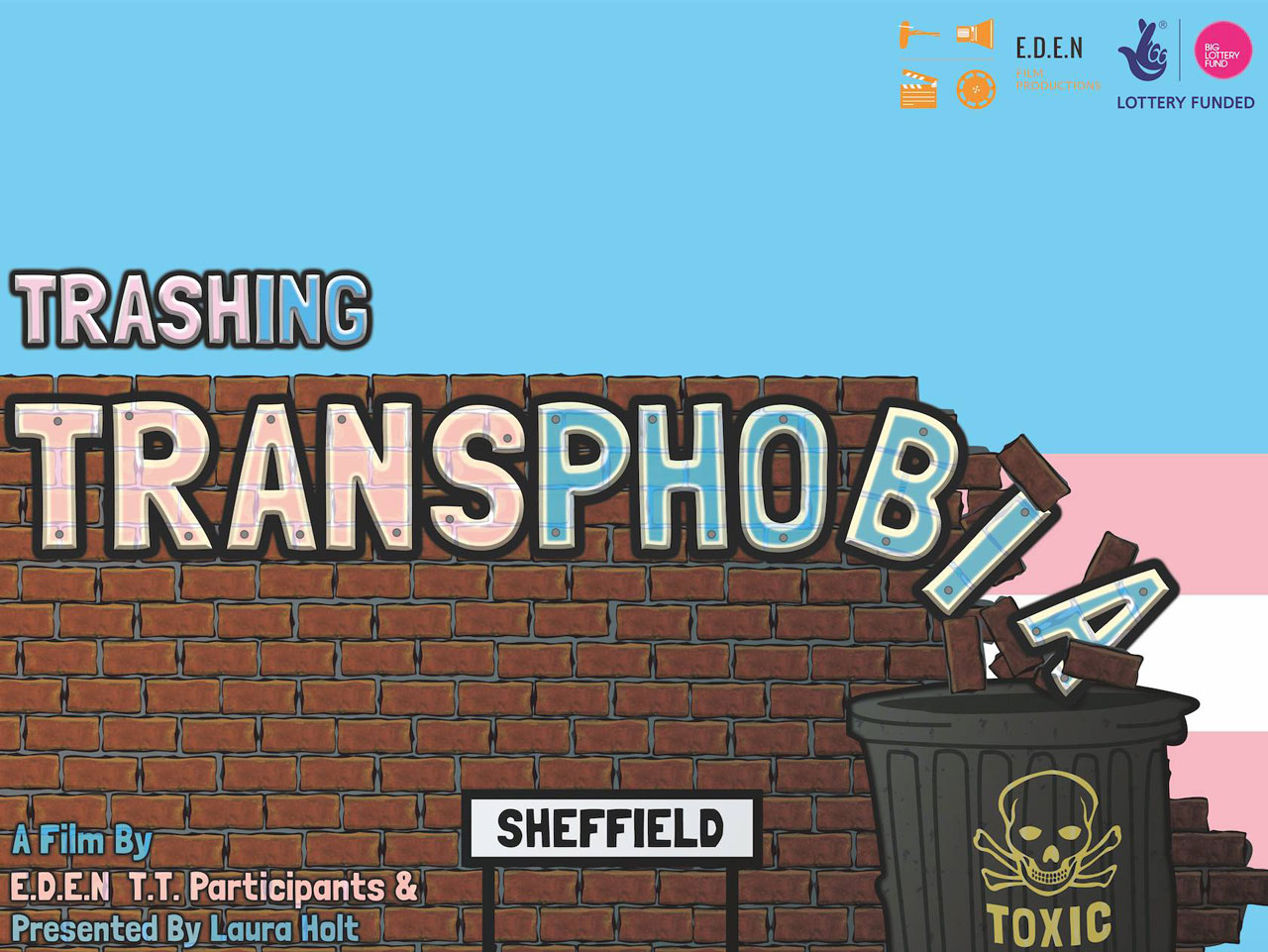 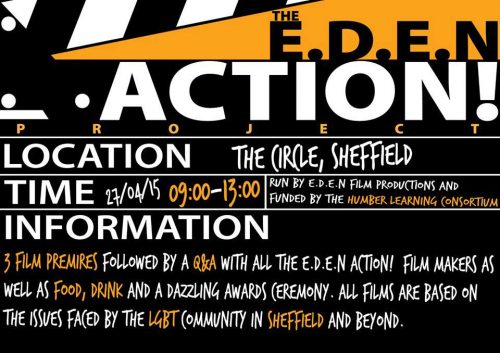 We hosted a premiere screening of the three films that were produced on E.D.E.N Action! alongside a Q&A with the 13 filmmakers.

E.D.E.N Action! was a Humber Learning Consortium-funded project for unemployed members of the LGBTQ+ community in and around Sheffield, aimed at developing filmmaking skills and employability skills. The project ran in 2015 and empowered participants with the abilities of storytelling and filmmaking whilst educating members of the public about LGBTQ+ diversity through the films that the participants produced.

The films:
Byephobia – A black and white drama busting the myths of bisexuality. Set in a vintage style Sheffield cafe, we find out why Mr Jones is wrong to make assumptions about his date, the bisexual Miss Applegate.

Do we really need a “gay scene”? – A debate about the LGBT+ scene in Sheffield and beyond. Featuring prolific Sheffield voices this film discusses whether lesbian, gay, bisexual and transgender people want LGBT+ specific spaces or complete integration.

E.D.E.N Revealed – Going behind the scenes of E.D.E.N Action! we discover how the project unfolded and how the films that the group produced actually came to be.

We hosted our very first screening event, the premiere screening of our feature film Families Like Ours at the Sheffield Odeon cinema.

Families Like Ours is a film by the members of E.D.E.N Incubator project. The film raises awareness of homophobia and transphobia and focusing in particular on family. E.D.E.N Incubator was funded by the Big Lottery Fund’s Awards for All programme and engaged members of the LGBTQ+ community in filmmaking skills, through academic and practical sessions. The group then developed their ideas for the film deciding to produce a documentary based on the theme family. 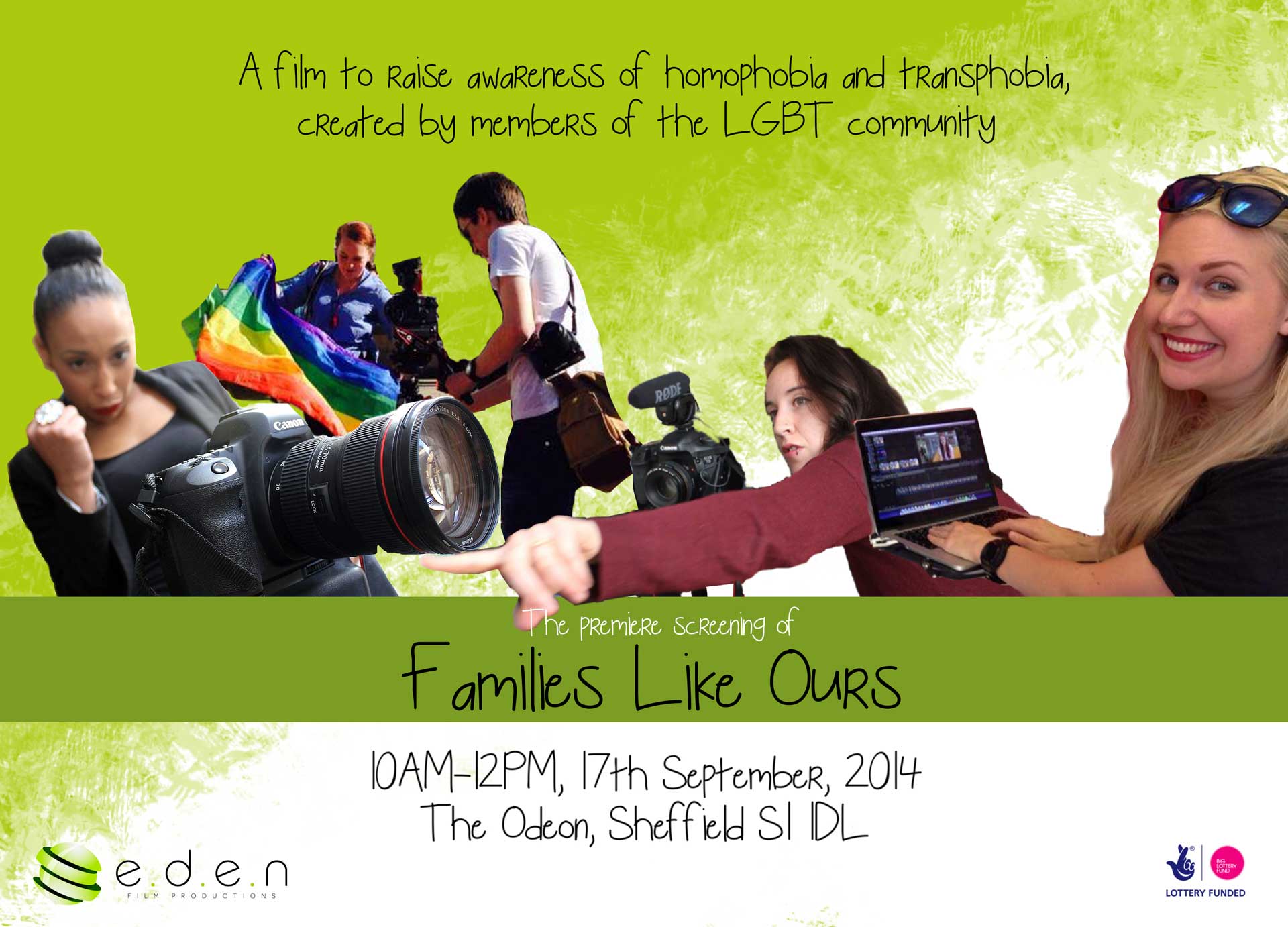